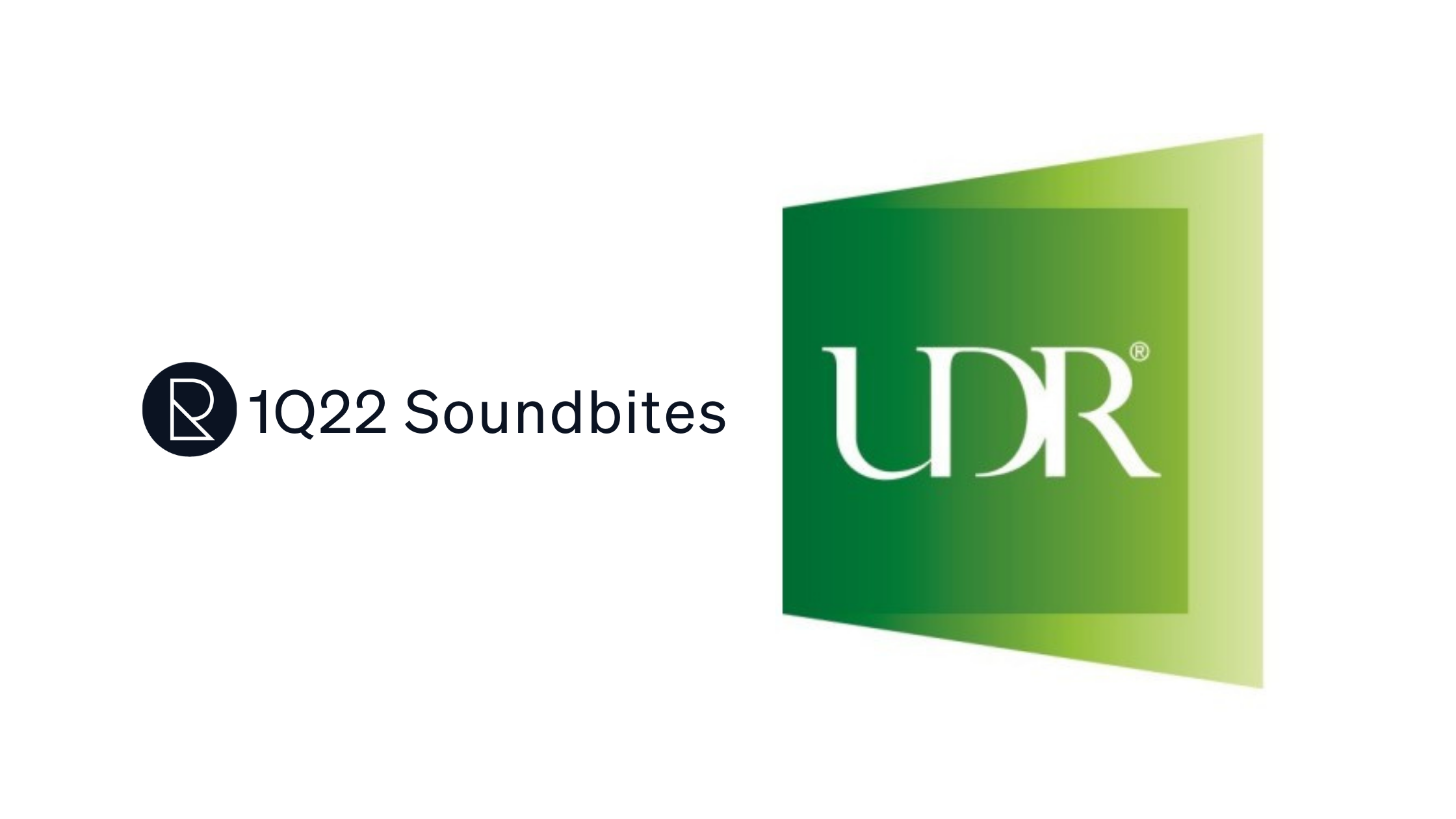 This remains the strongest operating environment that I or any of my fellow associates at UDR have ever encountered. Demand remains robust, turnover continues to decline, blended lease rate growth has continued to accelerate from already elevated levels and new supply growth remains relatively stable.

Blended lease rate growth has continued to accelerate to 16% to 17% in April, with new lease growth of more than 18% and renewals of better than 15%. This is driven by robust widespread demand and our ongoing ability to capture our in-place 10% to 11% portfolio average loss to lease.

Occupancy shows no signs of deterioration as alternative housing options like single-family rentals and for-sale homes have become even less affordable versus multifamily.

Based on current rents versus the cost of homeownership, it is 45% less expensive versus 35% pre-COVID to rent and own across UDR markets -- and turnover remains light in April thus far.

We continue to expect occupancy to remain relatively high and average 97.2% to 97.4% or a 10 to 30 basis point improvement over full-year 2021 results.

We delivered initial apartment homes at 3 of our active developments, 1 each in Denver, Suburban Philadelphia, and Suburban Dallas. The expected weighted average stabilized yield for these communities is approximately 7.2%.

We also replenished and grew our development pipeline with 2 additional starts, 1 each in Tampa and Suburban Dallas at Vitruvian Park, for a total budgeted cost of approximately $188 million. We believe both projects will be high value add.

Additionally, we are scheduled to close on the acquisition of a land site in Southeast Florida that is entitled to 300-plus apartment homes.

We did add a couple of new starts here in the quarter. So taking that pipeline up to around $700 million. If you kind of bifurcate that into 2 groups, you look at the lease-up deals kind of mid-to-high 6 of stabilized yields at this point. It's So pretty great performance on those. The newer starts trended toward the high 5s, and low 6s, so consistent with where we've historically been.

In terms of new land, we're in the process of a parcel in Fort Lauderdale. We've also got a number of opportunities that we kind of started to allude to with the equity raise and some of the upcoming uses of capital. But we've got SoCal, Inland Empire, Denver, D.C., Dallas. And so we've got a pretty robust pipeline. We're working through on the land side.

We have seen pretty substantial cost increases over the last 12 months, a lot of that on the hard cost side and a lot of that driven by labor in some of those hotter Sunbelt markets if you will. But from a yield standpoint, we're holding pretty close to where we've historically been. Current yields kind of 5.25-ish and on a stabilized basis kind of high 5s, 5.75%, 6-ish percent.

On the acquisition side, we've got a deal tied up in Suburban Boston right now that is in the low 4s forward cap rate range that, checks a lot of the boxes that we've talked about previously in terms of the operational upside, the platform efficiencies, the capital expenditure programs, et cetera.

There's a continuous wall of capital looking to increase their exposure to apartments. Listings on new deals are not diminishing. In fact, there's a record number of deals year-to-date. It's up about 60% over 2021.

The buyers are being a bit more patient and sellers are seeing thinner buyer pools due to the abundance of options available in the market. received. This has impacted the seller's ability to push pricing after initial bids have been Movement in interest rates is clearly the largest driver that's impacting pricing and therefore, levered buyers are seeing more of an impact on pricing.

On average, cap rates compressed roughly 100 basis points over the last year to kind of that 3.25% to 3.75% range as buyers were able to underwrite and capture the significant mark-to-market in the rent rolls. Today, we're seeing cap rates closer to 3.5% to 4% and a little bit higher.

Markets like San Francisco and New York haven't been as impacted as they continue to have a runway of rent growth versus communities in the Sunbelt that have already benefited from significant rental increases in the run rate over the last several quarters.

Although pricing has recently moved, like I said, flat to slightly down, almost all assets across our markets and across the country have seen a rapid increase in pricing. And even today those pricing changes are still more valuable than they were 8 to 10 months ago.

So see more pressure in the Sunbelt. Like, permit-wise, they're still up 40% versus pre-COVID. you could start to So you'll probably see some pressure there coming.

Markets like Raleigh and Atlanta and Charlotte that we're not in as well as probably Austin and Nashville continue to see some supply pressures but are balanced with really good demographic and population growth. And if I may see an income growth there, which they haven't seen over time. So hopefully, the ability to absorb some of that supply. But generally speaking, supply is pretty well constrained at this point in time.

View the full report on Businesswire.