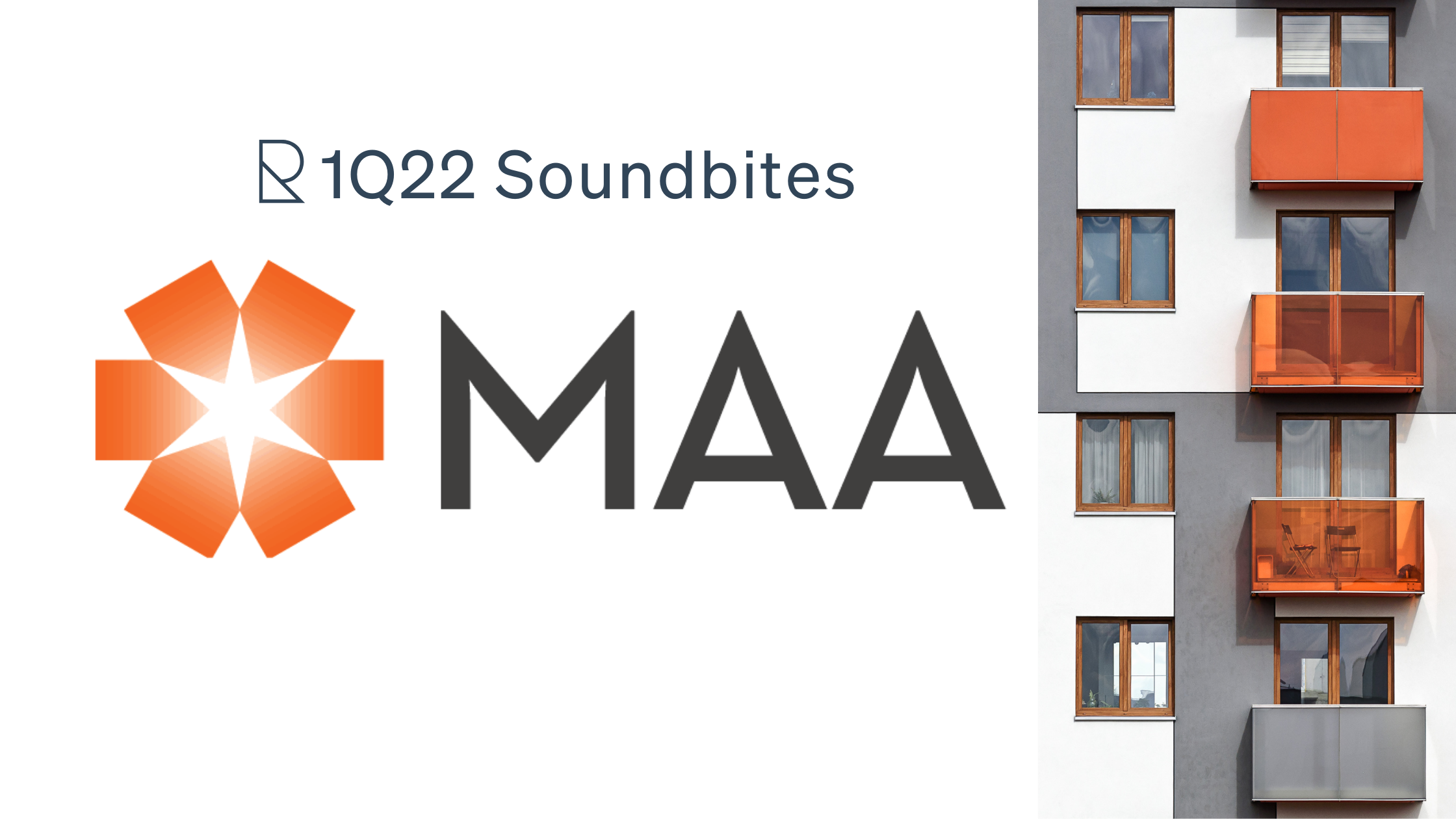 Resident turnover continues to remain low with move-outs further declining by close to 6% as compared to 1Q21. These trends continue to support same-store portfolio rent growth of 12.4% YOY.

And encouragingly, the new leases effect in 1Q22 were 16.8% higher than the expiring leases.

We are expecting to break ground on another 3 projects later this year located in Raleigh, Tampa, and Denver. Leasing conditions clearly remain very favorable.

During 1Q22, we started construction on a 352-unit project in Denver called MAA Park Central. This is the first phase of a 3-phase 1,000-unit project on land we purchased in late 2020.

Predevelopment work at our 3 young sites in Raleigh, Tampa, and Denver is progressing. And subject to receiving acceptable construction costs, we expect to start construction on these projects this year. Additionally, we continue predevelopment work on several in-house and prepurchase developments that we hope to start over the next 18 months in Atlanta, Charlotte, Denver, Orlando, Phoenix, and Salt Lake City. This pool of future development opportunities includes an entitled site in Denver that we purchased in the first quarter of this year.

Material shortages and shipping delays are prevalent in the market today. And in many instances, necessitate us to place orders and make deposits much earlier in the process than we had to in the past to secure materials as well as our place in the delivery queue.

Our 2022 disposition plan is underway with 2 properties in the Fort Worth market currently under contract with an expected closing date later in the second quarter. Buyer interest was strong for these 30-year-old properties with one buyer winning the opportunity to purchase both. We plan to sell 2 additional properties later in the year.

Our transaction team also remains engaged in the transaction market, and we're actively evaluating several acquisition opportunities, and we continue to believe that as we get later in the year, more compelling opportunities for acquiring stabilized and lease-up properties are likely to materialize.

Average daily occupancy for the month of April is currently strong at 95.7%. And exposure, which is all vacant units plus notices through a 60-day period, is just 8.5%. Both numbers are in line with our expectations and support our ability to continue to prioritize rent growth

Overall, same-store operating expenses were in line with expectations for 1Q22 but we do expect continued inflationary pressure over the remainder of the year and particularly in personnel and maintenance costs.

We're a few weeks into April or wrapping up April in mid-16s. And I'll tell you, we've certainly gotten some pushback on renewal increases. But those folks that are leaving for the price, we're replacing with someone paying 27% higher. So, what we see on this is good accept rates for renewals, both in terms of the number of people that are renewing and the increase.

When we started this year, we kind of expected a construction cost increase of, call it, 8% across the board. And I would say that that's probably increased to 10% or 12% this year.

We're averaging about a 5.7% yield right now on our underwritten rents. And on those that are under construction, we have construction costs that are locked in on projects that we are modeling going forward. We continue to expect those yields to be in the, call it, 5.25%, 5.5% range.

On acquisitions, where yields are 3% to 3.5%, development spreads are in that 150 to 200 basis points range. And so we still continue to believe that taking into account the risk associated with the development and the costs and all those things that, is still a good place to put our capital.

Read the transcript on APNews.